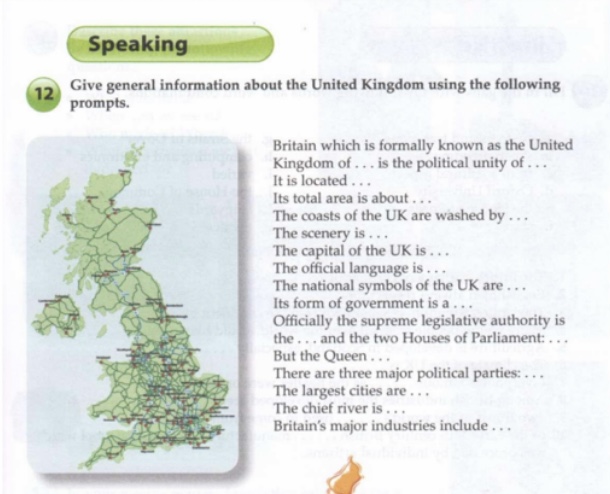 Britain which is formally known as the United Kingdom of Great Britain and Northern Ireland is the political unity of England, Scotland, Wales and Northern Ireland.
It is located on the British Isles.
It's total area is about 244 thousand square kilometres.
The coasts of the UK are washed by seas of 2 oceans:  the Arctic and the Atlantic.
The scenery is the coastline is rather picturesque.
The capital of the UK is London.
The official language is English.
The national symbols of the UK are the Red rose and the Lion, the flag 'Union Jack', and the anthem 'God Save the Queen'.
Its form of government is a constitutional monarchy.
Officially the supreme legislative authority is the Queen in Parliament
and the two Houses of Parliament .and the elected House of Commons.
But The Queen officially opens each Parliamentary session.
The  three major parties are the conservative party, the new labour party, and the democratic liberal party.
The largest cities are Birmingham, Glasgow, Liverpool, Manchester, Edinburgh, Belfast and Cardiff.