Read the text and mark the statements as True (T), False (F) or Not Stated (NS)

The kings of ancient Egypt were called Pharaohs. One of them was Tutankhamun
who lived more than three thousand years ago.
He became Pharaoh when he was about 9 years old, and his rule was not very
important. Tutankhamun also died very young. Historians believe that he died at the
age of 18, but they are not sure how. Probably he had a head injury from an accident.
Others say he died from an infection after breaking his leg. Like all Egyptian
Pharaohs Tutankhamun was buried in a tomb on the west bank of the Nile.
All the Pharaohs were buried in tombs like Tutankhamun’s. However, most of these
tombs were robbed by thieves and all the treasures were stolen. But Tutankhamun’s
tomb was untouched. Only in 1922 it was discovered by the British archaeologist
Horward Carter.
When the tomb was opened, Carter couldn’t believe his eyes. ‘Can you see
anything?’ a friend asked him. ‘Yes’, said Carter, ‘Wonderful things!’ There were
more than 5,000 objects, which included a wonderful golden mask of Tutankhamun.
The ancient Egyptians believed in a life after death, so they put a lot of personal
things into the tomb. And in Tutankhamun’s tomb there were clothes, beds, glasses,
plates. Carter also found models of ships, toys and games. There were other objects
like chariots, swords, armoury, statues of Tutankhamun and many Egyptian gods, and
of course, a lot of jewels. Many of these things are now displayed in the Museum of
Cairo in Egypt. 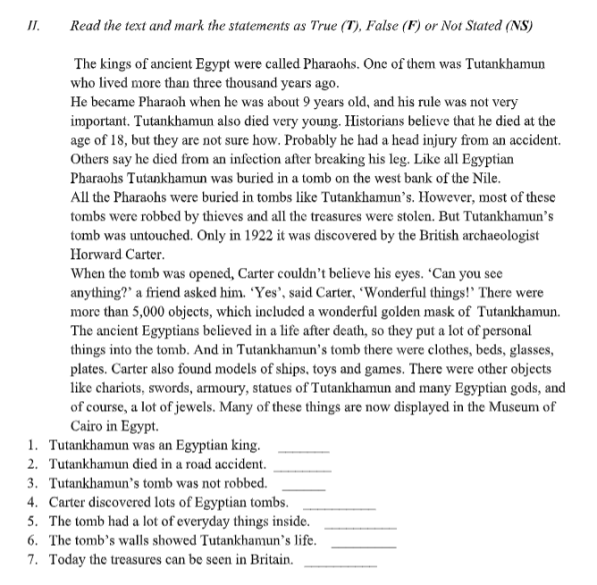